Find below a set of fantastic pictures provided by Lawrence showing the awarding of the championship trophy at AGM meetings. Many faces are still present and recognised by members today and it shows the rich history that we are lucky to have. 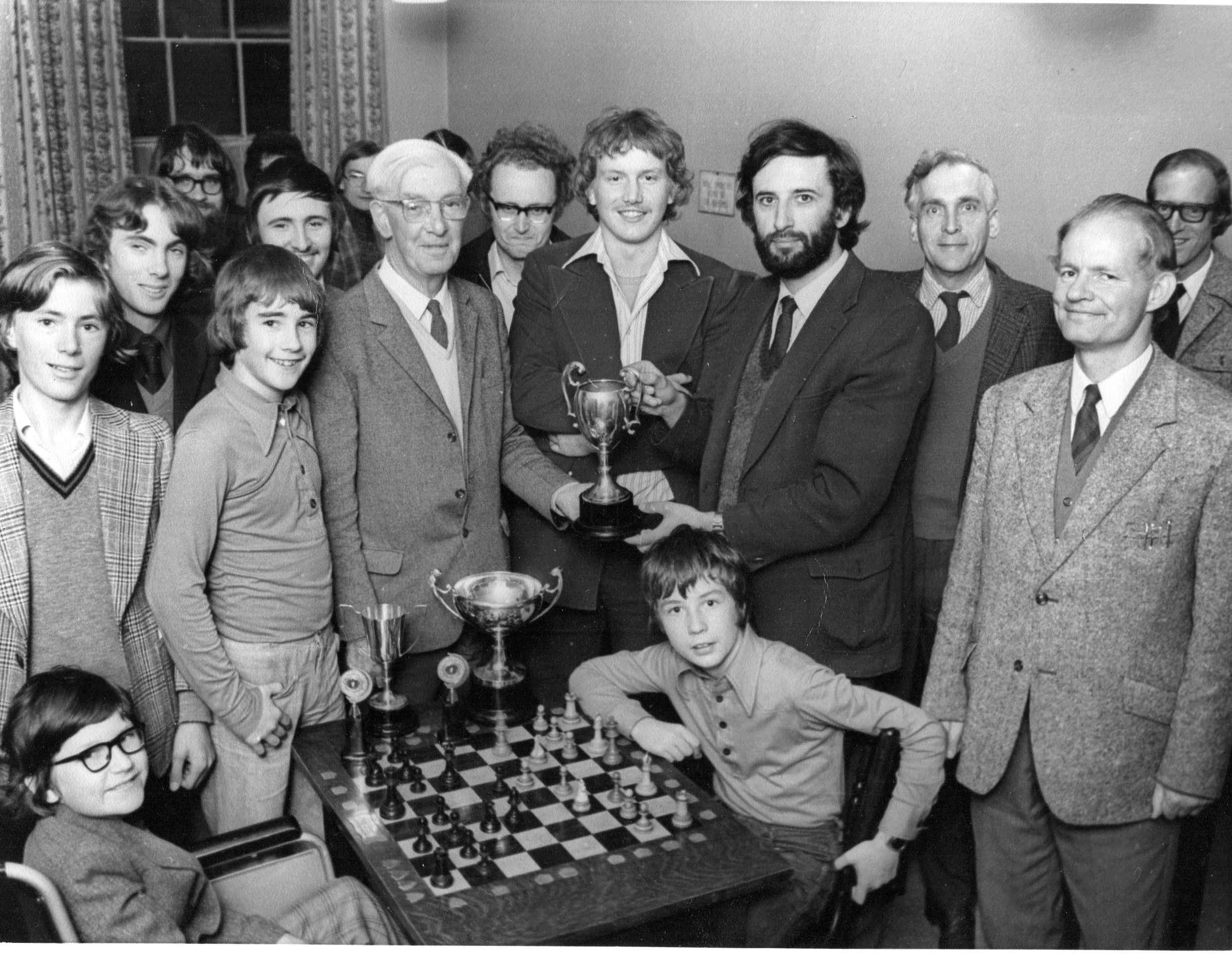 Below is an excellent brief history of the club stretching back into the 19th century penned by Lawrence Bland.

A meeting was held on October 29th 1895 at the Market Street Coffee Tavern to consider forming a chess club in Lancaster. A General Meeting held again at the Coffee Tavern on November 7th formed Lancaster Chess Club, Alec Munro was president with T. Warwick secretary & treasurer. Meeting every Thursday with yearly subscriptions of 2/6 with 6d entrance fee.

The club moved in 1900-01 to Maddocks Central Café in Market Square, later known as the Empire café, demolished after WW2, becoming a Littlewood’s Store, latterly a Morrison Store, which at present is closed. The club continued until September 1916 and closed for the rest of WW1. Reopening in October 1919, in the Palladium Cinema Café in Market Square, which was used for the 1919-20, this is now W.H.Smiths. In September 1920 the club moved to a smallish room above Tylers shoe shop on Cheapside, continuing there until February 1953, this is now part of McDonalds.

The club closed down for the whole of World War Two, a Post War Revival Meeting was held on October 1st 1945,w hich also celebrated the jubilee of the club. Having to move from above Tylers shoe shop owing to structural and other alterations planned by the owners, the spent the end of 1952-53 & 1953-54 seasons at the Friends Hall in Fenton Street, which didn’t prove popular, so the club to 43 West Road, a private house, which had been used for friendly matches since the war, they stayed there from 1954 to 1960. In 1960, the club moved to the Royal Hotel in Thurnham Street and in 1964 moved to the Alexander Hotel (now the closed Revolution Bar), then in 1968 to the Oddfellows Hall in Queen Street, then in 1979 to the basement of the Trades Hall in Fenton Street and finally to the Reform Club in September 1981, originally playing in the ground level room, moving to the 1st floor before settling in our present top floor room.

The club celebrated it’s 75th anniversary on November 20th 1971 with John Littlewood giving a simultaneous display at the Royal Kings Arms, followed by a dinner at the hotel.

The club has had a regular programme of friendlies over the years, with the ‘Roses Match’ with York starting in 1983, the most recent event. We help form a Lancaster Chess League in 1905, which continued until 1922, although the league didn’t run every season. The present Lancaster, Morecambe & District Chess League was formed in 1956 and has continued to the present day. The Lancashire Chess Association was formed in 1897 and we joined in 1898-99, playing in various county leagues over the years and national competitions. Major H.A.Proctor (later MP for Accrington) and probably the son of the Rev.H.A.Proctor , who was club secretary in 1910-12, gave five guineas for a club championship table, this was made at Waring & Gillow for £6 10/-. The club champion has the right to sit it this table, although handicap were used in the championship pre-war! In 1962-63, Eric Fay presented the club with an inlaid oak and mahogany chess table made by his father.

The 1st Lancaster One-Day Congress was started in 1980 and continued for many years. Many good players have been members of the club over the years, including Tony Ball, Edward Boswell (world famous problemist), Dick Collins, A.C.Haines, Samuel Keir, Kazimerz Lenartowicz, Sandor Szalanczi, Fred Turner and Ian Wells (tragically drowned in Brazil age 17 in 1982).

The Club meets Tuesdays (7 pm onwards) from late September until the end of April.

Fun and casual games (with the exception of match nights), all ages are welcome.